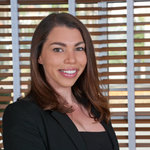 Serena Salva, Esq. is a second-generation Miami native of Cuban-Puerto Rican decent. Attorney Salva attended Conchita Espinosa Academy from kindergarten through eighth grade where she learned to become a hardworking disciplined student while taking on a rigorous schedule of dance, music, and acting classes. Ms. Salva attended Archbishop Coleman F. Carroll High School where she played volleyball and was a member of Thespian Troupe 6348 in which she competed throughout the district and state winning various awards throughout her four years there.

Attorney Salva graduated with Honors from Miami Dade College with an Associates Degree in Special Education, an Associates Degree in Paralegal Studies, and a Bachelor's Degree in Criminal Justice. In August 2015, Ms. Salva began her law studies at St. Thomas University School of Law where she graduated cum laude in May 2018 at the top 10% of her class. During her time in law school she was an active member in Phi Alpha Delta Law Fraternity, Florida Association of Women Lawyers (current member), Cuban American Bar Association (current member), and Hispanic American Law Student Association. Moreover, Ms. Salva was an intern for the Eleventh Judicial Circuit Civil Division for the Honorable Judge Daryl E. Trawick where she was able to observe many cases in the courtroom as well as work on several special projects overseen by His Honor.

Prior to joining Segarra & Associates, P.A. in May 2012, Ms. Salva was an educator, a theater coach, a Board Member for various community theater companies, as well as a Brand Manager for a major publicly traded U.S. fashion brand. Attorney Salva began as a legal assistant with the Firm and has spent the past over six years first becoming a paralegal and now, proudly, the Firm's Associate Attorney. Ms. Salva has always been dedicated to the Firm's personalized service to each client and believes in individualized strategic planning for every case the Firm manages. Not only will Attorney Salva be focusing on the plethora of Family and Matrimonial Law cases but also will be providing services to clients in need of assistance in estate planning via wills, trusts, designated health care surrogates, powers of attorney, and many other estate planning tools.

We know that family means the world to you. At Segarra & Associates, P.A., we understand families and with great pride have served as the premier family law firm in Miami since 2008. We practice exclusively in family law with the goal of helping our clients get through their legal issues and on a path towards a brighter future. Call today and let us help guide you through to the next chapter of your life.

We accept the above credit cards.