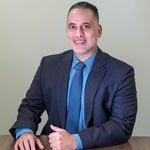 Attorney Manuel A. Segarra, III (Known by friends and colleagues as “Manny”) was born and raised on the north side of Chicago, Illinois. Tragedy struck Manny's family early in his life as his father fell victim to violence in the city of Chicago and died when Manny was a young child.  Manny overcame this adversity with the steadfastness and support of his family. Manny was raised by his Mother (a single parent) who was a elementary school teacher for the Cook County Public School System for over thirty-one (31) years as well as his older sister. Manny credits these strong women for helping instill the strength of character and grit he possesses to this day.  He attended a Roman Catholic elementary school and a public high school in the Northwestern Suburbs of Cook County.

Manny then attended Loyola University Chicago, where he graduated in 1997 with a Bachelors of Art in Political Science, a Bachelors of Science in Psychology and a Minor in Spanish Literature. While at Loyola University Chicago, he was a member of the Student Government Association and of Delta Chi Fraternity. Manny worked two (2) jobs to help pay for his undergraduate studies, working as a legal clerk at a renown civil firm in Chicago during the week and in the kitchen of a hospital on weekends. These experiences further helped shape his strong work ethic and drive to succeed.

Manny subsequently went on to study at the University of Illinois College of Law. While at the University of Illinois College of Law he competed in the Frederick Douglas Moot Court Competition, was a board member of the Latino Law Students Association, worked as mentor for minority law students as an undergraduate guidance counselor, and was elected by the student body as the first Hispanic President of Student Bar Association in the history of that law school. During the summer of his first year of law school he interned at the Illinois Attorney General's Office where he drafted responses to writs of habeas corpus filed by convicted felons. Manny spent his second summer of law school working for the City of Chicago Department of Law handling traffic enforcement cases. He graduated from the University of Illinois College of Law in the year 2000 obtaining his Juris Doctor.

In September of 2008, Manny created the law firm Segarra & Associates, P.A. with the hope of bringing his accomplished advocacy skills, extensive legal knowledge and veteran litigation acumen to the practice of Matrimonial and Family Law. He has been successfully representing family law clients of diverse socio-economic backgrounds bringing the compassion and understanding of a victim advocate along with the experience and tenaciousness of a former prosecutor. He has an established reputation for professionalism with the family law bench and his colleagues alike.  He treats all of his clients with the dignity and respect they merit and deserve. Manny has conducted hundreds of evidentiary hearings in family court and is a seasoned litigator who is a relentless and fierce advocate for his clients. Manny has represented family law clients in various Florida jurisdictions as well as successfully appearing  in front of the Third District Court of Appeals on multiple occasions.

Additionally, given his extensive twenty-one (21) plus years of litigation; professional experience; and trial skills; Manny is regularly appointed by the Courts in the Eleventh Judicial Circuit in and for Miami-Dade County as a Guardian ad Litem to advocate for the best interest of minor children. He is often judicially appointed as a Guardian ad Litem in contentious child custody cases to act as next friend of the minor children and to make parental responsibility, timesharing and child custody recommendations to the Court. Manny takes great pride in giving back to the community with his service as a Guardian ad Litem.

Manny is also a Florida Supreme Court Certified Family Law Mediator whereby he helps to direct the mediation process in a neutral manner in order to encourage and facilitate the resolution of the issues in contested cases. Manny's considerable experience litigating family law cases, stellar reputation within the legal community and fairmindedness makes him a highly sought after Family Law Mediator.

Manny is a doting father of a talented teenage son who is an alumnus of Miami's prestigious performing arts high school New World School of the Arts and is currently studying musical theater in college. Manny is a past member of the League of Prosecutors, the Puerto Rican Bar Association, the Cuban Bar Association as well as the Wilkie D. Ferguson Bar Association. He is a Eucharistic Minister; Lector; and Emmaus Brother at his Church. Manny has been on the Board of various Non-Profit Organizations including the Backstage Boosters in Support of New World School of the Arts (parent booster organization in support of the theater and musical theater divisions); “Grove for Ghana” (helping to build water wells, schools and clinics in Ghana, Africa) and “Florida Wildlife Kids” (helping children with ADD, ADHD and Autism experience nature). In is spare time Manny enjoys working out at crossfit, is a scotch and cigar connoisseur, and an avid reader.